Circle dance is a style of dance done in a circle or semicircle to musical accompaniment, such as rhythm instruments and singing. Circle dancing is probably the oldest known dance formation and was part of community life from when people first started to dance.

To counter the negativity associated with “walls” and “immigration” we are opening this year’s parade with a Native American Circle Dance. When we honor Native American dance, we acknowledge that we are ALL immigrants.
Led by Grand Marshal Native American Louis Mofsie, the Circle Dance reflects different experiences and ways of being in the world, and comprises a vast range of dance styles and movement vocabularies representative in the Dance Parade. Native dances ultimately remind people of their connection to all living things and unite people with the world around them.

Dancing in a circle is an ancient tradition common to many cultures for marking special occasions, rituals, strengthening community and encouraging togetherness. The dance can also be enjoyed as an uplifting group experience or as part of a meditation. Circle dances are choreographed to many different styles of music and rhythms.

Unlike line dancing, circle dancers are in physical contact with each other; the connection is made by hand-to-hand, finger-to-finger or hands-on-shoulders. It is a type of dance where anyone can join in without the need of partners. Generally, the participants follow a leader around the dance floor while holding the hand of the dancers beside them. The dance can be gentle or energetic.

Modern circle dance mixes traditional folk dances, mainly from European or Near Eastern sources, with recently choreographed ones to a variety of music both ancient and modern. There is also a growing repertoire of new circle dances to classical music and contemporary songs.

Culture
Modern circle dancing is found in many cultures, including Arabic (Lebanese and Iraqi), Israeli (see Jewish dance and Israeli folk dancing), Assyrian, Kurdish, Turkish, Armenian, Azerbaijani, Maltese, and South Eastern European (i.e. Albanian, Bosnian, Bulgarian, Croatian, Greek and Serbian, to name a few).
Despite its immense reputation in the Middle East and southeast Europe, circle dancing also has a historical prominence in Brittany, Catalonia and Ireland to the west of Europe, and also in South America (Peruvian), Tibet, and with Native Americans (see ghost dance). It is also used, in its more meditative form, in worship within various religious traditions including, the Church of England and the Islamic Haḍra dances. Western Europe: An-Dro
An Dro, meaning “the turn”, is a Breton circle dance. The dancers link the little fingers in a long line, swinging their arms, whilst moving to their left. The arm movements consist first of two circular motions going up and back followed by one in the opposite direction. The leader (person at the left-hand end of the line) will lead the line into a spiral or double it back on itself to form patterns on the dance floor, and allow the dancers to see each other. Thousands of medieval tombstones called “Stecci” were found in Bosnia and Hercegovina and neighboring areas. They dated from the end of the 12th century to the 16th century. They bear inscription and figures which look like dancers in a chain. Men and women are portrayed dancing together holding hands at shoulder level but occasionally the groups consist of only one sex.[4][5]

In Macedonia near the town of Zletovo, the murals on the monastery of Lesnovo (Lesnovo Manastir), which date from the 14th century, show a group of young men linking arms in a round dance. A chronicle from 1344 urges the people of the city of Zadar to sing and dance circle dances for a festival. However, a reference comes from Bulgaria in a manuscript of a 14th-century sermon, which calls chain dances “devilish and damned.” 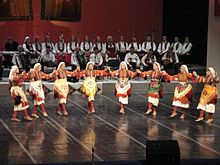 The hora dance originates in the Balkans but also found in other countries (including Romania and Moldova). The dancers hold each other’s hands and the circle spins, usually counterclockwise, as each participant follows a sequence of three steps forward and one step back. The Hora is popular during wedding celebrations and festivals, and is an essential part of the social entertainment in rural areas. In Bulgaria, it is not necessary to be in a circle; a curving line of people is also acceptable.[22]

The kolo is a collective folk dance common in various South Slavic regions, such as Serbia, named after the circle formed by the dancers. It is performed amongst groups of people (usually several dozen, at the very least three) holding each other’s having their hands around each other’s waists (ideally in a circle, hence the name). There is almost no movement above the waist. Faroese dance
The Faroese dance is the national circle dance of the Faroe Islands. The dance originated from the medieval times, which survived only in the Faroe Islands, while in other European countries it was banned by the church, due to its pagan origin. The dance is danced traditionally in a circle, but when a lot of people take part in the dance they usually let it swing around in various wobbles within the circle. The dance in itself only consists in holding each other’s hands, while the dancers form a circle, dancing two steps to the left and one to the right wirhout crossing the legs. When more and more dancers join the dance ring, the circle starts to bend and forms a new one within itself.

Sacred Circle Dance
The Sacred Circle Dance was brought to the Findhorn Foundation community in Scotland by Bernhard Wosien who brought traditional circle dances that he had gathered from across Eastern Europe.
Colin Harrison and David Roberts took the dances to other parts of the UK where they started regular groups in south east England and Somerset, then across Europe, the US and elsewhere. The network extends also to Australia, New Zealand, South Africa and South America and India.
A small centrepiece of flowers or other objects is often placed at the centre of the circle to help focus the dancers and maintain the circular shape. Much debate goes on within the sacred circle dance network about what is meant by ‘sacred’ in the dance. Dabke is popular in Lebanon, Syria, Palestin, Israel, Jordan and Turkey. The most famous type of the dance is the Al-Shamaliyya (الشمالية). It consists of a lawweeh (لويح) at the head of a group of men holding hands and formed in a semicircle. The lawweeh is expected to be particularly skilled in accuracy, ability to improvise, and quickness (generally light on his feet). The dancers develop a synchronized movement and step, and when the singers finish their song the lawweeh breaks from the semicircle to dance on their own. The lawweeh is the most popular and familiar form of dabke danced for happy family celebrations. Ganggangsullae is an ancient Korean dance that was first used to bring about a bountiful harvest and has developed into a cultural symbol for Korea. It incorporates singing, dancing, and playing and is exclusively performed by women.  The dance is mostly performed in the southwestern coastal province of Jeollanam-do. It is often associated with the Chuseok holiday and Daeboreum.

The next time you see a Circle Dance, join in — It’s fun and you will be participating in an ancient cultural tradition!